We were proud to present a varied public programme of events during the Samuel Beckett Summer School 2014. Featuring leading artists, academics, and Beckett’s past collaborators, these talks and performances aimed to give audiences a rare insight into the life and works of Samuel Beckett.

Eh Joe, an intimate drama exploring the relationship between voice and camera, was written in English by Samuel Beckett, directed by Alan Gibson, and broadcast by the BBC on 4 July 1966. This original production of the teleplay features Irish actor Jack Mc Gowran in a part especially written for him by Beckett, with the Voice interpreted by British actress Sian Phillips. Eh Joe was then published as a text in 1967 with a number of stage versions following, including a memorable production with actor Michael Gambon in the title role at the Gate in 2006. There are currently thirteen versions recorded, making it the most produced of his teleplays, but this is a rare opportunity to see the original which Beckett worked on extensively.
.
Film (1964)
.
Samuel Beckett’s only film screenplay, Film, was shot and produced in New York in 1964 and premiered in 1965 at the Venice Film Festival. Directed by Alan Schneider, who directed many of his plays in first productions in the United States, it features Buster Keaton in the starring role. Beckett’s choice to make his first foray into the film world a ‘silent movie’ represents his admiration and respect for the silent film genre, and in particular the work of Buster Keaton. Originally titled The Eye, the film explores concepts of perception and the philosophy of Bishop George Berkeley, the 18th century Irish philosopher. It had a mixed reception when it was released: Gilles Deleuze claimed it as the “greatest Irish film,” while the then Sunday Times reviewer Dilys Powell declared it “a load of old bosh.”
.
Film (1979)
..
This is a chance to see a little-known remake of Film and compare it with the original. This version was produced by the British Film Institute in 1979, without the supervision of Beckett. The BFI subtitled the work: Film, A Screenplay by Samuel Beckett. It was directed by David Rayner Clark and featured Max Wall, the English comedian, music hall and film actor.
.
Total duration of the three films will be approximately one hour.
.
Questions after the screening will be moderated by Jonathan Heron. This presentation is supported by the Irish Film Institute.

Event 2: What Where on Film – A screening of What Where directed by Walter Asmus, introduced and moderated by Anthony Uhlmann. 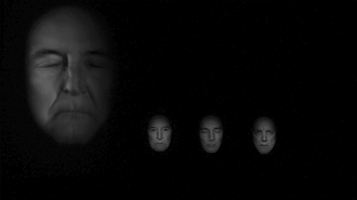 In Samuel Beckett’s What Where four disembodied faces engage in a cycle of interrogation and torture. Its treatment of this subject matter makes it one of Beckett’s most overtly political works.

What Where is accompanied by a documentary that offers insights into Beckett’s process in adapting the original work for television and that gives a sense of the challenges involved in bringing Beckett’s vision back to the screen in a new production.

What Where was originally written for the stage and was adapted by Beckett for German television. Walter D. Asmus, who was assistant director to Beckett in adapting the work, is the director of this new production. Asmus brings an intimate understanding of the process that Beckett went through in adapting the work and has been crucial in making this the first English language version that is faithful to the original vision that Beckett had for bringing What Where to the screen. This new production of What Where also represents a significant technical updating of the original version, with new production techniques adding subtleties and dimensions to the work that were not achievable with the technology that was available when the play was first adapted for the screen.

The screening will be followed with a short documentary entitled The Remaking of Samuel Beckett’s What Where, directed and edited by Ben Denham, written by Anthony Uhlmann and Ben Denham.
Running time: 13 min 16 seconds

Event 3: Walter Asmus: “It’s all poetic, Walter..” – A reflection on directing from one of Beckett’s collaborators. In association with the AHRC Staging Beckett project.

Walter Asmus is a German theatre director who worked with Samuel Beckett on many occasions for the stage and television from the time they first met at the Schiller-Theater in Berlin 1974, and he became Beckett’s assistant director on the famous production of Waiting for Godot that toured internationally. He has since directed all of Beckett’s plays and worked worldwide. His 1991 Gate Theatre (Dublin) production of Waiting for Godot was revived several times with the same cast until 2008 and had en suite runs at the Gate Theatre. It went on tour to Chicago, Sevilla, Toronto, Melbourne, London, New York (Lincoln Center Festival), Beijing and Shanghai, and had US tours in 1998 and 2006. It finished after an all-Ireland tour (32 counties, one night only) on October 3, 2008. This production of Waiting for Godot (starring Barry McGovern, Johnny Murphy, Alan Stanford and Stephen Brennan) was regarded by reviewers and academics alike as “definitive”. His television work includes Footfalls, Rockaby and Eh Joe with Billie Whitelaw, and a French version of Waiting for Godot with Roman Polanski as Lucky. He also directed Footfalls for the Beckett on Film Project. In 2012 he directed a TV/DVD version of What Where (produced by University of Western Sydney). Most recently, Asmus directed Lisa Dwan in a Trilogy of Not I/Footfalls/Rockaby seen in 2014 at the Royal Court Theatre and the West End in London and at the Galway International Arts Festival, with a Great Britain and further international tour ahead (BAM in New York, Perth, Hong Kong, Singapore, Paris), before it returns to London in June 2015 (Barbican Centre).

Questions will be moderated by Nicholas Johnson.
Presented In association with the AHRC Staging Beckett project: http://www.reading.ac.uk/ftt/research/ftt-staging-beckett.aspx/

Event 4: John Minihan: Beckett and the Wake – A conversation with the artist who took some of the most enduring photographs of Beckett, featuring rarely seen images alongside classics.

John Minihan is an Irish photographer, born in Dublin in 1946 and raised in Athy, County Kildare. Over his 50 year career Minihan developed close relationships with many writers including Samuel Beckett, and his images show a particular affinity between the two men. Minihan’s photos of Beckett are some of his best known, one in particular being described as one of the greatest photos of the twentieth century. Minihan first encountered Beckett in London in 1980, while Beckett was working on a production of Endgame. The two met on a number of occasions over the next few years, but it was not until 1985 that they met in Paris, where Minihan took some of his most iconic Beckett photographs.
.
Among Minihan’s numerous photographic publications are Photographs: Samuel Beckett (1995); Shadows from the Pale, Portrait of an Irish Town (1996); and An Unweaving of Rainbows, Images of Irish Writers (1996). He is currently a freelance photographer specialising in the arts. Minihan’s many exhibitions in museums and galleries around the world include the Museum of Modern Art, Rio de Janeiro, 1984; Centre Georges Pompidou, Paris 1986; the National Portrait Gallery, London 1987/8 and the October Gallery, London 1990 as well as the Guinness Hop Store, Dublin 1991. He currently lives and works in West Cork, Ireland.
.

Questions will be moderated by Nicholas Johnson.
Presented with generous support from the Samuel Beckett Theatre and the Provost’s Fund for the Visual and Performing Arts.

One thought on “Public Programme 2014”